Cain is in hot water… again.

He wants voters to believe his “targeted identification” policy proposal is not the same thing as racial profiling.

Here, in his own words, Cain tells us what the term really means, as it relates to the TSA using this approach in airports:

In contrast, here’s the definition of Racial Profiling:

Racial profiling is a form of discrimination by which law enforcement uses a person’s race or cultural background as the primary reason to suspect that the individual has broken the law.

Go ahead and pull those Muslims aside, get to the business of robbing them of their civil and Constitutional rights, all in the name of “targeted identification”.

In the spirit of Herman Cain and his supporters, I have been motivated to propose my own “targeted identification” plan. Moving forward, black people should be allowed to violate the rights of white conservatives. This is appropriate because people who look exactly like they do have been actively harming minority Americans for generations. 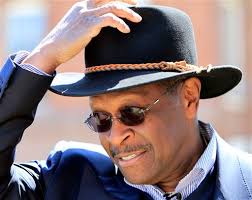 … at the beginning of the day, I hadn’t recalled as much as by the end of the day.”

So said Herman Cain, during a Fox News interview with Neil Cavuto while discussing the allegations of sexual harassment against him. Cain was referring to the fact that when first asked about the allegations, he conveniently remembered nothing- that is, until he realized that those pesky women were not going to disappear.

Suddenly, by his own admission, his memory improved. The more detailed the accusations, the more clear it became that this wasn’t going to go away, the better his recollection.

Since these allegations hit the news waves, Cain has been on a non-stop publicity tour, speaking to any number of media outlets. He says he wants to be as visible as possible, sharing with the world that he “doesn’t have anything to hide”.

Cain wants us to believe he is being upfront about these allegations, but in reality, he spends most of his time piling on slightly hysterical-sounding denials. On the rare occasion that he’s willing to talk about it (only to sympathetic conservative news outlets, ironically) he  peppers his denials with inconsistent statements.

First, he has no recollection of the incidents in question.

Next, he backs away from his assertion of amnesia, instead blaming his unwillingness to answer these accusations on the fact that the women in question were choosing to remain anonymous. How can he answer accusations from people who refuse to come forward and identify themselves?

So Politico provided him with the name of one of his accusers.

He still refused to answer.

Cain did eventually go on to confess that he had vague knowledge of the incidents in question, then later still admitted he was extremely familiar with the investigations and fully recalls them…

… Though he swore he had no idea about the financial settlements.

Some say we owe Cain the benefit of the doubt, as he’s found himself in a “he said, she said” situation in which no solid evidence of his lurid behavior has been brought to light.

Others claim that Cain is being attacked by left-wing liberals who simply hate the fact that a conservative black man is running for office (Cain himself has blamed Rick Perry, Mitt Romney, and most recently, liberals). He wants America to believe the allegations against him are simply part of a vast Democrat conspiracy, liberals bent on sending him straight to hell.

Then how come the sole woman willing to come out and accuse Cain publicly is actually a conservative?

Wait- it gets even better- not only is she a conservative, but she’s a teabagger member of the Tea Party.

This is not a “he said, she said” situation.

It is a “he said, they said” scenario.

This is not a situation in which some crazy lone-wolf of a woman has come out of the woodwork and made baseless allegations against a man of power. There are women, all of which are saying the exact same thing.

As Cain attempts to convince us that he is not, in fact, a boneheaded sexist pig (anybody see the most recent debate, by the way? Where he calls Rep. Nancy Pelosi “Princess Pelosi”? Oh Sorry. I digress), he puts himself in a situation that invites more questions than answers. His “recollection” of the events in question change and evolve as the women’s allegations become more clear and detailed.

In a single day he goes from having zero memory of these incidents to suddenly remembering them, albeit not clearly.

Next, by his own statements, we learn that actually, his recollection of the events are crystal clear- but only where the investigations are concerned.

Even on this point, his memory has inexplicably improved, and now remembers that the National Restaurant Association, while under his direction, did pay these women some money.

But, he says, those were separation agreements, not financial settlements, the funds were paid without his knowledge.

Cain expects people to simply swallow his contention that despite the fact that he was president of the National Restaurant Association during the time the allegations were made against him, he had no knowledge that the organization- people who worked for him- entered into financial settlements with the women who- it bears repeating- were making allegations against him.

Look- I know that was a monster of a run-on sentence, but it was necessary.

Cain simply refuses to give Americans credit for having a brain. He refuses to acknowledge that as individual people we are capable of forming our own opinions based on the evidence- yes, even circumstantial- laid before us. This despite the nonsense he continuously tries to force-feed us.

The story has completely fallen apart. Cain did that to himself. His own words, his own contradictions, his own back-pedaling has made him unbelievable in the eyes of the public. The Democrats didn’t do it to him, nor did his skin color.

He simply did it to himself.

And that, my friends, is the sound of a sinking ship.

Cain Harassment Issue: Who Said What to Whom?

We are beginning to learn more details of the sexual harassment allegations against the quirky candidate. Most recently, another allegation, made by an altogether different woman has surfaced, adding to the previous two on record.

… And then there were three.

As for Cain’s bid for the Presidency, it’s over- even if he refuses to admit it.

Rather than speak on the topic of these allegations in any intelligent fashion, he points the finger at Rick Perry, then Mitt Romney, and oh, look! He’s back to pointing at Perry again!

This guy is disgusting.